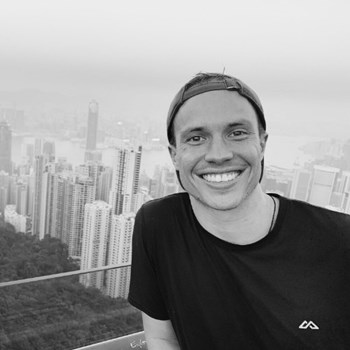 It helped me with taking the next step, to learn how to pitch and get seed funding for an idea.

At high school, Rohan Peacock sold photos at boat parties his friend organised on Sydney Harbour. After building a website and making money from a broad range of events, starting a business became a passion.

This entrepreneurial curiosity led him to study Commerce and Business at the Australian Catholic University (ACU). In his last year, he became involved in the nascent entrepreneurial hub on campus and found out about The Navigator, the inaugural unit at SSE.

“I was very interested to be involved in the Navigator when it was just a pilot,” he says. “It was so professionally run with a mix of instructors from industry and academics. I got a feel for the entrepreneurial ecosystem in Sydney and NSW.”

SSE laid out the strategy of how to approach Australian investors, Rohan says, and gave him insights to scale a business into bigger overseas markets.

He also loved the networking aspect of the Navigator, discovering what was going on at other universities.

“It was a fantastic way to meet with equally ambitious students and see what other universities were offering as support in the entrepreneurial space, and what I could bring back to ACU.”

Days after Rohan graduated from SSE – hoping to use the skills and experience he’d gained at University and SSE to create a startup – Tesla offered him a sales role and he had to recalibrate his plans.

“I realised I could gain a lot of insight and experience working in a big corporate that was a market-leader before jumping in at the deep end and launching my own startup,” he says.

Rohan eventually wants to start his own business that has a positive environmental impact and his role at Tesla builds on that passion.

“I feel I’m building a bridge for the next few years, gaining knowledge that will help me realise my entrepreneurial dream.”

To find out more about our upcoming units click here.