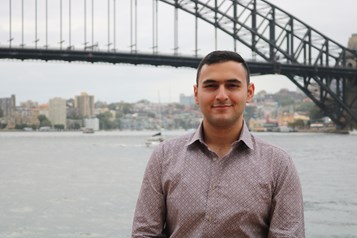 Having moved to Australia at the age of 17, Erfan had to learn English and study for his HSC while working a part-time job to support his living expenses. Through his experiences, he refined his intrapersonal skills and better understood his gifts and passions.

Over the past six years, he has taken on leadership roles within a number of projects and organisations, including founding Wollongong University Dramatic Society (WUDS) on his very first day at university and facilitating ELEVATE youth leadership conferences for year 11 students.

He will graduate from the University of Wollongong by the end of 2022 with a Bachelor of Civil Engineering (Honours). Erfan has cultivated a creative mindset through his theatrical pursuits and always works hard to share his vision with those around him.

Since 2018, Erfan has completed five SSE units, including the Navigator, Ideation, Innovation for Value Creation and Growth, Structuring for Success, and Activation.

In his own words, “SSE has been giving this ‘dreamy boy’ a chance to turn his visions into step-by-step plans and therefore reality. You have helped this ‘dramatic entrepreneur’ come to life. SSE, I thank you!”.