SSE acknowledges the Traditional Owners and Custodians of the unceded lands upon which we and our partners live, work, educate and inspire.

We pay our respects to Elders past, present and emerging, and the continuation of their invaluable cultural, spiritual and educational practices.

Take Your Startup To India – #IndiaBootcamp19

If you’re an emerging startup trying to solve the world’s big problems, there’s no hotter place right now than India to develop a global mindset.

The Young Entrepreneurs International Bootcamp to India is a key initiative of the NSW Department of Industry, in partnership with Sydney School of Entrepreneurship, to build new business relationships between NSW and India.

An impressive group of 33 startup founders from across NSW was selected to spend 10 days immersed in India’s exponentially growing innovation ecosystem in Mumbai, Ahmedabad, Pune and Bengaluru.

This highly diverse group of emerging entrepreneurs share a common dream of breaking into a fast-growing global market like India. We think it’s the largest group of Australian startups to visit India. 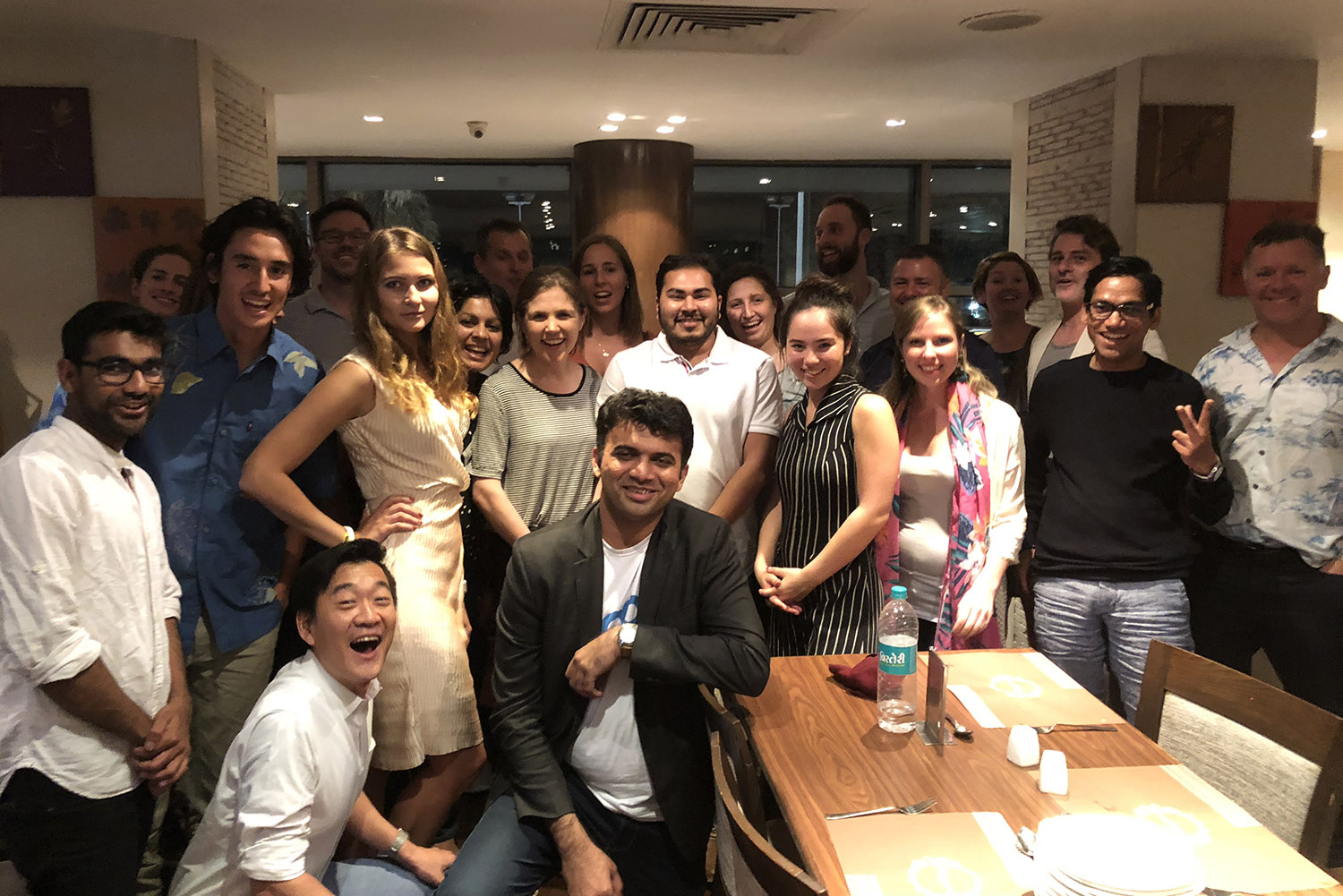 On our first day in Mumbai, we headed straight to Zone Startups India, a local startup incubator and our host partner for the 10-day Bootcamp.

We were warmly greeted by Ajay Ramasubramaniam, CEO of Zone Startups India, and Rohit Manchanda, the NSW Department of Industry’s Trade & Investment Commissioner.  After meeting with five local entrepreneurs, we were also lucky enough to meet with Tony Huber, the Australian Consulate General in Mumbai, who joined us on the Australia Day public holiday as it turned out.

Rohit Manchanda has represented the NSW Department of Industry in Mumbai for 9 years.  His team has never been busier since the NSW Government launched its renewed policy push to build new business partnerships between NSW and India, with a focus on startups.

The NSW Government is partnering on a series of technology programs to build links with India – one of the world’s most dynamic and fast-developing technology markets and an important trading partner for NSW.

The aim is to identify NSW startups that can supply innovation and technology to Indian companies who are hungry for innovation, don’t want to reinvent the wheel, and have commercialisation capability.

Rohit Manchanda painted the big picture – the size and complexity of the India market and the sheer enormity of the opportunity in coming years.

Nationally, India is the 6th largest country in the world by area, with the second largest acreage of arable land. With a population of 1.3 billion, one in six people in the world is Indian.

India’s GDP is US$2.8 trillion, with a growth rate of 7.9% p.a. over the last decade.  India has the world’s youngest population and the largest workforce – a potent mix for future growth.

By 2030 India is forecasted to be the world’s third-largest economy. 600 million people are expected to live in cities, with 586 million Indians in the middle and upper middle-income brackets.

Despite an absence of economic crisis, India is undertaking massive economic and technological reforms.

Mumbai – the city of dreams

Mumbai is the business and financial capital of India. It’s also the centre of the media and entertainment industry, notably Bollywood.

Mumbai’s official population is 25 million but said to be much higher.  It holds more or less the entire population of Australia in one city, roughly the same area as Sydney.

The Mumbai Local train network is the heart of the city. Each day 8.5 million people take around 3,000 trains to and from work.  There are less than 400,000 cars on the roads per day.

Over 60% of Mumbai citizens live in around 2,000 slums, but they are not necessarily poor.  A richly diverse and strong community of different religion, class, education and language groups live together in harmony. Dharavi is the largest of 2,000 slums in Mumbai, with an official population of more than 1 million people and a US$2 billion economy.

India is revolutionising access to low-cost mobile phones, which is disrupting the way India does business on a mass scale.

India has the world’s second largest mobile phone subscriber base of more than one billion people.

Every farmer living in poverty will have a mobile phone in the next two years. Their first ever digital device will have good network coverage and data speeds, internet banking, smartphone features and locally produced content.

In the next two years, internet users are expected to reach 800 million.

India is ranked third in the global startup ecosystem, with 53% of startup founders aged between 26-35 years old.

Entrepreneurship is gaining more social acceptance in India. There are 8,000 startups in India, with US$15 billion in early stage startups.

A cohesive startup philosophy was clearly articulated by everyone we met on our first day.

Solve the world’s biggest problems to make life better for all. Don’t try to predict the future – make the future, and make it in India.

Rohit Manchanda’s key advice for success is patience and persistence. “India is not an easy market to crack, but it offers humongous opportunities provided you are filling a need.”